Here we are, on our new Air Canada Dreamliner service from Vienna to Toronto, having just completed our 4 nights in Vienna, following the 2 nights we spent in Budapest.

We took the train for almost 3 hours from Budapest to Vienna and arriving in Vienna was almost like arriving in an entirely different land. It surprised me that Budapest and Vienna were so very different, given their close geography and sometimes intertwined history. Where Budapest has the twin cities of Buda and Pest, both centered around the Danube, Vienna is not intersected by the river. Where Budapest is still showing signs of the communist era and there is a drastic mix of beautifully restored buildings and buildings that haven’t been touched and are still riddled in bullet holes, Vienna is pristine with every building restored and perfect – not a paint colour out of place and not a single piece of cobblestone broken. I was very glad we had the chance to experience both beautiful and diverse cities and I was even more thankful that where Budapest rained for us, Vienna brought out the sunshine.

We stayed at the Intercontinental Hotel in Vienna and it is outside Stadpark on the edge of the downtown, historic core area of Vienna. It was a very nice hotel with a beautiful hotel lobby bar and very comfortable rooms. It was a great location to have for a home base. We attended a conference for a couple of days and their conference facilities also seemed in good order – a good choice of conference rooms, food and beverage, audio visual and friendly staff.

When we had some free time in Vienna, we made the most of this beautiful city:

*Kursalon Concert Hall
Located right across the street from our hotel in Stadpark the Kursalon Concert Hall has a concert every night featuring Strauss, Mozart, Ballet and Opera. The performance was just under 2 hours.  We paid 69EUR for good seats and found it quite entertaining for casual music lovers like us. I would have loved to have seen an opera at the Vienna Opera, but there was not one playing when we had a free evening.

*Lipizzaner Stallions
Lipizzaner Stallions perform at the Spanish Riding School. You can either purchase seats that are “seated” or “standing”. Our seated tickets start around 100EUR each. The performance is just over an hour and the horses and riders go through the different skills the horses learn over many years. It was impressive.

*Hofburg Palace
Adjacent to the Spanish Riding School, the Hofburg Palace has a tour of the Silver Collection, the SISI Museum and the Imperial Apartments for 15EUR per person. The self-guided audio tour took about 1 1/2 hours. 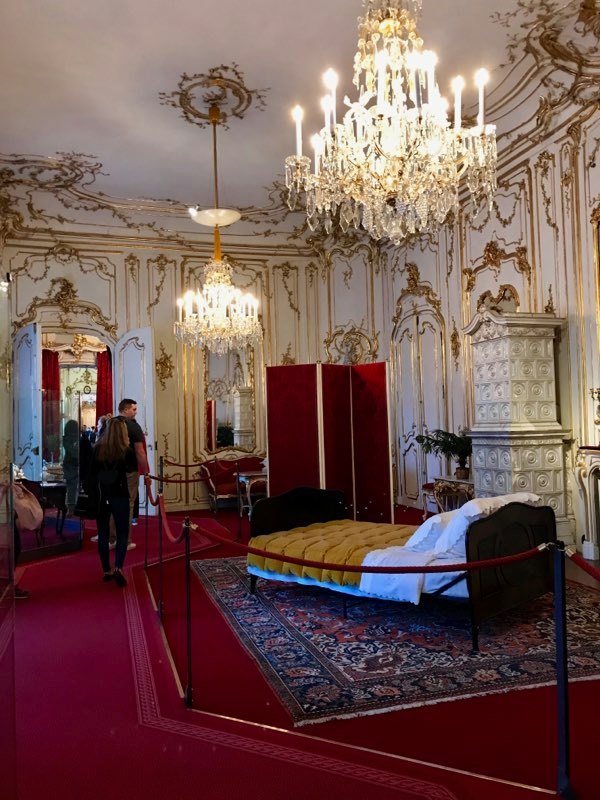 *St. Stephens Cathedral
This is an amazing Gothic structure in the middle of the main square in Vienna. You can go in and view the main cathedral, plus there are options to go up the tower for 5EUR for views over all of Vienna, or for 7EUR you can go down into the Catacombs beneath St. Stephens. Mark climbed the tower while I was at the conference, so together we chose to go beneath St. Stephens to the Catacombs. The Cardinals and Arch Bishops are buried there – It is still used today, so there are some new graves as well as some that are over 400 years old. The Hapsburgs and Imperial family had their internal organs buried there and the main chambers were full of all the ordinary people, including one chamber that was filled with those who didn’t survive the last bubonic plague…a little creepy, but interesting.

*Stadpark
This is a beautiful green space with walking paths, food vendors, outdoor restaurants and a nice place to unwind, relax and rest your weary feet. You can anything from a hot dog, to fine dining and Biergartens.

We ate at many good restaurants from small local coffee shops to upper scale Italian and Austrian restaurants. One highlight was Lugeck – located in a historic building, just off the main square. It serves local Austrian food with a bit of flair. The service was great, as was the food and for four of us, with wine, beer and dinner, the bill was 150EUR, which seemed very reasonable. The Wiener Schnitzel was particularly good and with two huge pieces, big enough for two to share!

One afternoon we happened into a Keller – a Viennese tradition of historical underground vaults used for bars/restaurants. This particular Keller had been used for almost 1000 years – called the Zwolf Apostelkeller. It had several rooms, vaults, traditional Viennese dining (think upgraded pub food), Austrian wines and beer and local entertainment. It is a very unique and Viennese experience not to be missed when you are in Vienna. The location is right around the corner from the Lugeck restaurant.

There is an outdoor restaurant; just inside the Stadpark entrance, across from the Intercontinental called the Kleinod Stadtgarten meets Cafe Francais. They had the most amazing “tarts”, which to us North Americans is a very thin crust pizza with toppings like bacon and spring onions, apples and Brie, etc. It was the most enjoyable lunch, outside in the sunshine and green space of the park with wonderful food and a nice Rose Garden.

I look forward to returning to Austria one day to see more outside of Vienna, but for the short time period we had, Vienna did not disappoint.