Today we are on the island of Kyushu and Fukuoka (careful how you say it) is the island’s largest city.  Because of its closeness to the Asian mainland (closer to Seoul than to Tokyo), Fukuoka has been an important harbor city for many centuries and was chosen by the Mongol invasion forces as their landing point in the 13th century.

Today’s Fukuoka is the product of the fusion of two cities in the year 1889, when the port city of Hakata and the former castle town of Fukuoka were united into one city called Fukuoka. Hakata remains the name of one of Fukuoka’s central districts and of the main railway station.

After several days of a variety of ports where we have seen fantastic castles and shrines, we decided that today, we just needed to go for a walk and find some green space to enjoy.  As a result, we jumped on the ship’s shuttle bus to downtown, then bypassed the local Fukuoka Castle and some shrines and walked about ½ hour to Ohori Park.  Great choice.

This area was once an inlet of Kakata Bay and when Fukuoka Castle was built, the north side was reclaimed and made into the outer moat around the castle.  Ohori Park was opened in 1929.

There was a lovely little lake where people could rent paddle boats in the shape of swans and row boats.  There was also a track for jogging or biking around the lake. 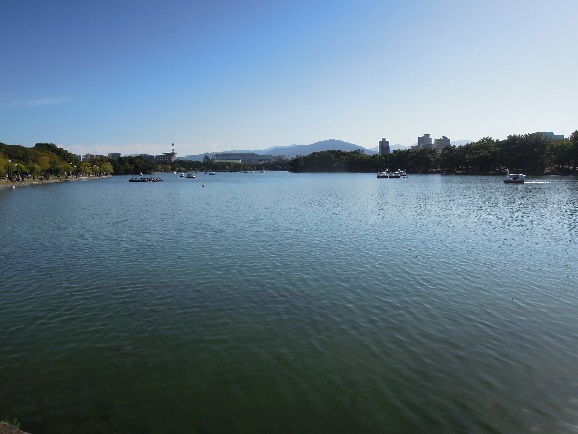 The weather was perfect as we walked around the lake.  There was a bridge to an island which also connected to the other side of the lake.  After strolling and crossing the bridge, we headed to the Japanese Gardens.

The Japanese Gardens were created in 1984 to commemorate the 50th anniversary of Ohori Park. It has an area of 12,000 square meters and the main features of the garden are its large pond, artificial hills, waterfalls, a meandering stream, dry landscape garden and more!  I hope these pictures capture the zen feeling of the gardens.

Really a beautiful day in Japan.  Next stop is Beijing, China which promises to be a completely different experience!