A Pirate’s Life For Me!

We booked the Family Pirate Adventure through SeaSpray Cruises; roughly $100 for adults and $45 for kids. You can save 15% by booking with them directly – which we did. They still pick you up and drop you off at your hotel.

Due to an unfortunate sunburn incident for Mark (a rookie mistake) it was only Sydney and I.  We departed at 8 am, drove to nearby Rodney Bay and were on the pirate ship, the Lianas Ransom at 8:30 am.

We sailed down the west coast to Soufriere. On the way the pirates (crew) entertained the kids with face painting, dressing up as a pirates and sword fighting.  Once in Soufriere, we visited the volcano, botanical gardens and Diamond Waterfall. I really enjoyed the cool canopy of the rain forest in the botanical gardens after being out in the heat.

On the way back, we had lunch and stopped for a swim. There was also a hunt for treasure and water fight on-board. We docked back at about 4:30; tired, happy and thoroughly entertained.  This is a great tour for families with kids for ages at 12 and under.

This is what I have found to be the good, and the not so good about the Morgan Bay Beach Resort. 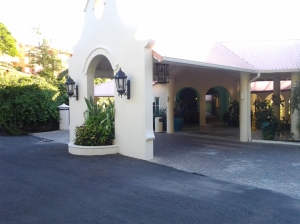 Not so good:
The pools need to be redone, which is being taken care of in September.  It is the hotel policy not to stock the mini-bars. This is annoying. No bottles of water in the room. No juice for Sydney, no beer for the delightful balcony.  The buffet (although good service) has hit and miss food.  Wifi is only in the lobby and one of the bar areas. I prefer it in the room.

The good:
The a la carte food so far has been wonderful.  The one bedroom suites are great and spacious and have an amazing view!

The great:
In general the service has been great. Tonight was exceptional.  Due to a mix-up, (Mark’s fault of course) 🙂 we were an hour late for dinner at Bambou Asian restaurant. They seated us when we arrived without question.  We realized our mistake once we were seated and apologized to them for our error. They were exceptionally gracious and you would never know we put them out. This was a highlight of the service received so far and goes to show how much the little things mean when it comes to providing great service to a client – this is true in any industry, I think! 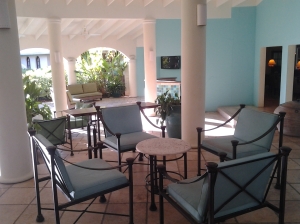 Sheraton Gateway Toronto: Although it tends to be a little more expensive than the other airport area hotels, I was once again reminded that the convenience is worth it.  It’s located in terminal 3 so if you are flying WestJet, it is right outside your terminal.  We flew Air Canada into terminal 1, and they now have a free monorail that zips you between terminal 1 and 3 within a minute or two.  No waiting for shuttles or paying for taxis.  Five minutes after we picked up our luggage we were waiting in the hotel check in line – priceless when you have a short stopover and just need some sleep.

When we originally made our reservation at Morgan Bay Beach resort in St Lucia we were booked into a deluxe garden view room.  At the time upgrading to a one bedroom suite was $278 a night extra, which was more than I wanted to spend.

A week before our arrival I noticed they still had suites available.  I called them again about the cost of the upgrade.  They had a special deal, $50 dollars a night. Sold!

We arrived in St Lucia after a 5.5 hour flight from Toronto and a 1.5 hour transfer on curvy, windy roads from the airport. (We had a very good transfer driver that we booked privately through Janus at Saint Lucia Airport Transfers. His name was Danny and he had lots of good info on the island – he’s on my recommend list and was one of the cheaper transfers at $70 per car per direction.) Anyway, we were warmly greeted with rum punch and taken to our room….which turned out to be the deluxe room originally booked.  A quick phone call and they promised to get our suite ready and come get us in about half hour. In the meantime I looked around the deluxe room and decided it was solid three star. Bedding was older and patio was small, but they had a new flat screen TV and the bathroom was clean and nice looking, which is always most important to me. 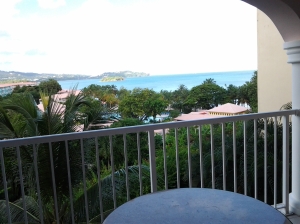 This resort was just taken over by Elite Island Resorts; they are doing a lot of renovations and are closing for a few weeks in September to complete major work (like the pools). They really need it; it will be nice when they are done.

When we arrived at our one bedroom suite it was a huge sigh of relief. Gorgeous, five star quality room. It is very clean, very bright, with a huge patio, Roman tub that I have a hard time getting Sydney out of…and the view is to die for. 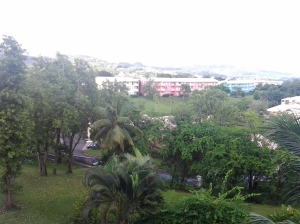 I will mention a couple last points before I sign off. The staff is all very friendly and accommodating. There are tons of children at this resort which is good if you have kids, but not so good if you prefer adults only.

This is one of the nicer beaches that I have been on.  It is really wide and goes for probably 3 miles from tip to top.  It’s great to walk along the beach in the morning past all the hotels here in Playacar.  It is just white sand as far as the eye can see.   There are so many palm trees in front of our resort that you can’t actually see the hotel from the water.  This makes it great to find some shade when the temperatures get too hot.  The other thing that I love about this hotel is that you don’t have to worry about getting a chair in the morning, there are more chairs then people.  Nothing that I hate more than having to get up really early to put a towel down on a chair or risk having nothing.  Here you can just come down to the beach when ever you roll out of bed.  There are a lot of activities offered by the hotel.  They have kayaks, hobie cats and wind surfers all for free.  There is also the other guys selling scuba trips jet skis and parasailing so there is never a dull moment.   There is some topless bathing which I think is in bad taste at a family resort but I see a lot of smiling teenagers who probably don’t agree.  There is also an area setup for massages on the beach which looks very nice.    There is no bar service on the beach so sadly you have to walk up to the pool bar to get your drinks.  The weather here has been great around 31 every day so those palm trees are really coming in handy.  Well I am off for a swim and then a quick nap on my chair.  I love vacations.  Talk later. 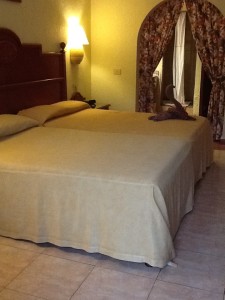 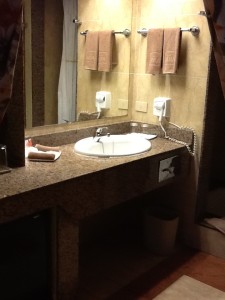 There is no spa or gym at our hotel so we walk down to the RIU Yucatan to check it out.  It is about a 5 minute walk from us.  The gym is small but looks like it has all the popular equipment.  There is a rowing machine, 2 elliptical machines, 2 treadmills, 2 bikes, free weights and a weight machine.  They are open from 7:00am until 7:30pm.  The gym and the spa are at the same location so we stop at the spa desk and book ourselves in for a Swedish massage.  Our appointment is at 4:00pm and so we book and head back to our hotel.    We are back about 10 minutes before our appointment to fill in all the paperwork.  This is a small spa with limited services.  We head upstairs into the massage room.  There is nothing nicer than a massage to get your into relax mode.  The girls here are great and after the massage we move into the lobby of the RIU Yucatan for a quick drink.  We decide to walk the beach back to our hotel as it is quite hot and the water on the feet will help. 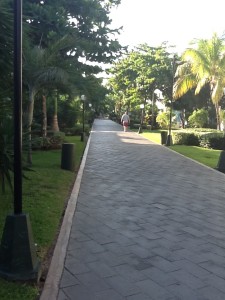 This is a small resort so there are not a lot of dining options.  There is the main buffet restaurant for breakfast and supper.  It is a large room with plenty of options for food.  Here are my 2 main drawbacks .  No mimosas at breakfast and no air conditioning so at night for supper it can get quite warm here despite the many ceiling fans.  They also have the Turquesa restaurant for lunch and at night this restaurant converts to the steakhouse and Mexican restaurant.  They are just on opposite  sides.  These are open air restaurants so if it is hot out, it is hot in the restaurant.  They also have an Asian restaurant called the Jade in the main lobby.  All specialty restaurants have to have a reservation.  You must make your reservations in the morning at the buffet.  They open at 7:00am so you need to get there early to get signed up.  We did go to the Steakhouse restaurant where they have a set menu and they just bring you the entrees.  You do have a choice of your main entrée.   The food was good and the service was excellent.  They have the best staff at this hotel.  We ate mostly at the buffet because we are too lazy to get up and make reservations.